If you can read this, thank a booze-bag.

This is going to sound like madness, but America — nay, the world — owes an enormous debt to people who have at least made a hobby of drinking, especially drinking beer, as it turns out. You can read written English because of drinking, perhaps. You definitely, however, owe your American liberty and ability to drink safe milk to those whose preferred libation 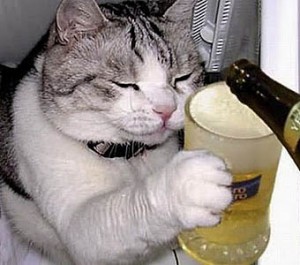 springs from the sublime and divine fermentation of barley, hops, yeast and whatever else is in beer: I’m not an expert, just a fan.

That is to say, drinkers make things happen. Tipplers get things done, often when they’re elbow-deep in their tipple of choice.

A ragtag group of tax-hating merchants, farmers and artisans fomented rebellion over tankards overflowing with spirit-lifting foam at the Green Dragon Tavern in Boston, the favorite watering hole of the Sons of Liberty. Read more about this here or, if you’re in the mood, head down to the Beantown Pub on Tremont Street and, as they say there, enjoy a Sam Adams across the street from Sam Adams (or, more accurately, his grave).

But you don’t like the taste of beer? Bet you like the taste of dry cold cereal even less. Sure, you can chow it down by the fistful right out of the box — if you’re a savage. Civilized people, though, eat it in a bowl only after soaking the stuff in milk. Before you climb on that high-calcium high horse, however, be sure to thank the American beer industry for letting you enjoy those Apple Jacks without running to the bathroom in paroxysms of nausea.

Yep, that kiddie breakfast staple doesn’t spoil so fast because of beer drinkers, and the desire of beer makers to truck beer across the grand old US of A to beer drinkers. French chemist Louis Pasteur decided to heat wine and beer to destroy the microbes that lead to spoilage, and soon that technique was used for cow’s milk, which is a particularly harmful-microbe-friendly environment. So, the history of safe, tasty milk came about because adults love drinking beer (and, I suppose, wine). So, just as with the American Revolution, I suppose we owe at least a grudging show of gratitude to the French for this, too.

Just as beer enriches the drinker, so this blog, rendered exquisitely in English, fills each reader with indescribable glee. And since English is the only language I write in, I owe thanks to the Irish monks who in the Middle Ages copied and protected English-language manuscripts, and preserved the literature and legends of ancient Greece and Rome. While I don’t have any direct evidence of ethyl alcohol’s role in this enterprise, come on: they’re Irish monks. Anyway, Thomas Cahill’s book “How the Irish Saved Civilization” discusses this a whole lot more authoritatively than I ever could.

So sisters and brothers — or Brothers, if you’re an Irish monk — join me in raising a glass to the love of beer, booze and wine. Please drink responsibly.