An enemy lives inside me. At least I think he’s the enemy.

He thwarts my ambition. He leads me into temptation. He criticizes my efforts, but then quickly salves my ego, telling me everything’s all right. Not everyone is meant to create, to participate. The world needs readers and observers, an audience for the actors.

That’s what the enemy says. At least I think he’s the enemy. 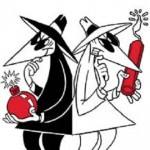 Maybe that guy’s the champion of my true nature, and the enemy is the one occasionally shaking me from my slumber. The enemy grabs my lapels and shakes me out of sweet complacency. Don’t smoke so much, he says. Cut out the sweets and crap food for just one month and see how you feel. Get your ass in the chair and write, numskull!

I’ve written it down for you, he says. Just give it 15 minutes a day, for crying out loud! Remember what I said a couple years ago about an overarching resolution for the new year? What the hell happened? I had such high hopes for you!

One thing is clear: The prospect of peace at my internal borders is grim.