I was talking to a colleague the other day (yes, I actually have colleagues again, at least for the summer) and we were talking about the crap TV we 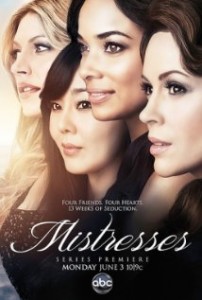 watch. Then I realized that I watch every single show on television.

Well, not really, but I watch a lot of TV. Some of it, like “Breaking Bad,” “The Walking Dead,” even “Game of Thrones” is quite good.

But I also like TV shows about solving problems, like “Bar Rescue,” “Restaurant Impossible,” and, of course, “Pit Boss” and “Pitbulls and Parolees.”

And, I hate to admit, I’ve been watching “Mistresses,” that is, the American version of the terrific guilty pleasure produced originally by the BBC. Yes, “Mistresses,” starring Alyssa Milano. I’m not proud of it but, I’ve got to say, it’s not that bad. They’ve done a creditable job with the remake (though it’s interesting that all the male character names are the same as in the original, yet the eponymous mistresses were given variations of the original character names — Savannah instead of Siobhan, for instance — though I don’t know how “Trudy” became “April.”) It’s also a little more United Colors of Benetton-esque than the UK version, which ain’t a bad thing.

Hey, at least it’s not “Three’s Company” reruns, though I’d certainly be catching one or two of those if they happened to be airing. And if I’m ever in a position to compete in a “Three’s Company”-based trivia contest, I will kick maximal ass.

No real point to this post, I suppose, except to cop to yet another time-waster. Acceptance is the first step in healing, I suppose.

2 thoughts on “TV, the true opiate of the masses”