The Sunday Boston Globe’s Money & Careers section featured an interesting four-story package about the plight of college-age job-seekers. One was the dispassionate “umbrella” article by a Globe correspondent, one was the Innovation Economy column focusing on entrepreneurial collegians, and the other two were first-person accounts from the job-hunting trenches. 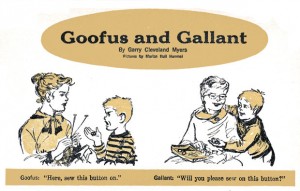 I’m not going to bother linking to anything, as the Globe is mostly hidden behind a paywall, but if you can get your hands on a copy, it’s worth looking over.

One piece bore the simple headline “Hired!” while the one opposite from it was titled “Not yet …” Kind of like the old “Goofus and Gallant” set-up in Highlights magazine.

Both recent grads’ pieces were good reads but, as someone who has reviewed in the high-hundreds of resumes, then interviewed and hired quite a few people, I could sum up the stories quite a bit more quickly than the authors themselves did.

Babson College alumnus Matt Muller, a 22-year-old business major with a concentration in IT management and legal studies, netted what seems like a sweet gig in San Francisco.

How’d he pull it off? The No. 1 way most people get jobs: He knew someone at the company.

That’s not to besmirch his credentials, personality or drive. He seems like he’s been a high-achiever since his preteen years and has already started a Web-design business. But the chief reason he got in the door is a friend worked there and recommended him. Then he didn’t blow it in the interview. Kudos!

Not so fortunate, however, is Greg Dube, a 23-year-old chemical engineering grad from Northeastern University. He’s finding out the hard way how competitive a field that used to be a slam-dunk, big-pay-right-out-of-school career opportunity has become. That’s not his only problem, however.

“I’m on the Ultimate Frisbee team and No Limits dance crew, two pastimes that are on my resume as interests,” he writes.

Perhaps I should remind the reader that Mr. Dube is not applying for a job as an Ultimate Frisbee coach or a judge on “So You Think You Can Dance?” So why is that shit on his resume?

I suspect he believes the inclusion of such material makes him appear interesting. To the contrary, it makes him appear like a perpetually adolescent slacker committed mainly to a sport that can be played while smoking a joint.

Also, the pictures of the job-seekers are quite different. Mr. Muller is dressed in a suit and tie, while Mr. Dube is wearing a “Keep Calm and Chive On” T-Shirt and a shit-eating grin. I had to look up what “chive on” means and, despite this Wikipedia entry, I remain benighted.

One thing I’m certain of, though: I hope to fuck that’s not the outfit he showed up to his job interview in.

Best of luck to both these gentlemen. May their career pursuits be exciting, lucrative and, I suppose, filled with lots of opportunities to chive on.