And I really felt like I watched too much TV recently when I viewed the first installment of the Roma Downey/Mark Burnett-produced “The Bible.”

Sure, the spectacle offers some decent acting and excellent SPFX, but for an enterprise that purports to bring The Bible to the TV-viewing masses, they left out just a few niggling details.

Here’s one: In the story of Sodom and Gomorrah, conveniently left out of Lot’s hiding of the angels of the Lord is Lot offering his virgin daughters to be raped by the marauding city dwellers.

Also missing is those same daughters getting dad drunk and, well, allow The Living Word to fill in the blanks.

And this Lot ain’t no Stewart Granger, that’s for sure. 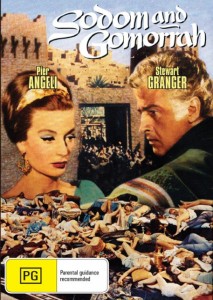 Perhaps those details were a bit too icky to find their way into “The Bible’s” shooting script. Fair enough. But how about something from the Book of Exodus? Like the Israelites turning their back on the God of Abraham, who has just led them out of Egyptian slavery, and erecting a golden calf? In the Bible, here’s how it goes down.

But in “The Bible,” Moses just hands the Ten Commandments off to Joshua and pretty much says, Fonz-like, “Knock yourself out.”