I can’t believe I’m saying this, but I need winter.

Don’t get me wrong. I hate winter with a passion as white and hot as snow is white and cold. But I need the constant lesson in humility winter brings.

One lesson is obvious: our inability to control the elements, and our charge to make the best of bad situations by laying up supplies, amassing sufficient money to keep one’s dwelling sound and warm, and mustering the fortitude 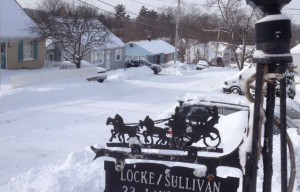 to suck it up and get out there and face the challenge of snow- and ice-mitigation.

But today I received another, more profound, lesson in humility. It came from a neighbor with whom, frankly, we haven’t gotten along.

Things started off terribly between our households when the late Buddy, Prince of West Methuen, on a couple of occasions availed himself of our neighbor’s lawn, unbeknownst to us (at least until our neighbor unequivocally and vociferously alerted us to the canine crime). You can probably guess what Buddy’s contribution to the contretemps was.

I bought our neighbor a case of Budweiser, left it on his doorstep as a peace offering, and we put the hard feelings in the rear-view mirror. Thus began a prolonged detente, punctuated occasionally by guttural, halfhearted greetings. We eventually erected a fence to keep our dogs on our property, and good fences made at least half-way-decent neighbors for years.

Relations between our camps were still somewhat frosty, but things hit a nadir last winter when I accidentally shoveled snow onto one of his trees, spurring a shouting match. (Both of us are perhaps afflicted, at least occasionally, with Irish tempers.)

However, circumstances led to an exchange, months later, of apologies for losing our cool and we went back to largely ignoring one another. Until today.

Today, for some unexpected reason attributable only to the grace of the God of Surprises, our neighbor approached me with an offer to snowblow our small yet still (on a day like today) formidable driveway. I reluctantly accepted, though unhesitatingly offered to pay him, or at least reimburse him for the gasoline exhausted in the task. He refused my offer and an enterprise that would have added a couple hours to a gargantuan undertaking — it still took me a few hours to clear the walk, deck and roofs — took about 10 minutes.

I’ve done nothing to deserve my neighbor’s largesse, yet I received it anyway. There’s been a lot of that lately in my life, and it’s still a struggle to accept.

I remain truly humbled by the magnanimity of others. Blessings abound, even when they’re disguised by a foot of snow.