Note: As I was watching television the other day, I saw one channel known for saccharine holiday fare — might have been Hallmark, could have been Lifetime — running back-to-back Christmas movies, and not even the classics. These were made-for-TV tripe starring Roma Downey or Susan Lucci or Gail O’Grady or Mitzi Kapture — one of those dames routinely in distress. So, in the spirit of holiday gifts nobody wants, here’s a repeat of something I wrote last year after Christmas, but edited a bit, since it’s still before Christmas (though you wouldn’t know it from watching TV or entering any store). The original post was titled “O holy moley!”

Now that the yuletide holidays are scratching at the window, I’m getting ready to be among those poor souls annually pilloried by the likes of Bill O’Reilly for waging the War on Christmas.

In fact, I rather enjoy the holiday and maintain that, among all the winter festivals, Christmas is far superior to its competitors.

But that doesn’t mean I don’t have a couple of gripes. Here goes:

1. Two verses of any Christmas carol will suffice, thank you. Sorry, “The Twelve Days of Christmas,” but after “two turtle doves,” I’ve tuned out.

2. Speaking of Christmas carols, I simply find no need for a 24/7 rotation of holiday “favorites” on the radio for days on end. If a station wants to have a Christmas carol blowout on Christmas Eve Day, Christmas Day and even Boxing Day, that’s fine. Otherwise, cut it out! (And for those who suggest I can just change the station, too late: I already beat you to it.)

Don’t mistake the aforementioned observations for a disdain for all things associated with Jolly Old St. Nick. In my mind, Christmas as observed by most Americans (regardless of creed) is without peer.

As a “Braveheart”-style rally for one’s august faith tradition and heroic ancestors, Hanukkah is okey-dokey, but as a holiday, well … come on, now. Hanukkah is dreidls. Christmas is Battling Tops. ‘Nuff said.

And Kwanzaa? Kwanzaa and I are the same age, and neither of us is yet eligible for a subscription to AARP Magazine. What the hell kind of holiday tradition is that? Come talk to me when you can grow a little peachfuzz, Kwanzaa.

When the weather outside begins to turn frightful, I typically torture everyone on my social media network with wishes for a joyous Saturnalia, but so far I’ve attracted only one adherent — counting myself — to that ancient Roman yuletide feast, so Christmas remains large and in charge. 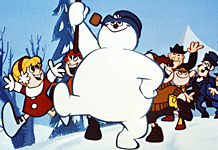 Is Frosty the Snowman the way and the light? Nah, didn’t think so.

That said, let me take a moment to clear up a couple of things. Christmas parties in public schools don’t represent an attempt to force religion down anyone’s throat, unless that religion is Frostianity.

At the same time, getting your ski pants in a twist when someone wishes you “happy holidays” rather than “Merry Christmas” doesn’t make you a good Christian, it makes you a grim and obnoxious bore.

If you’ve got anything to say, leave a comment below or contact me in person: I’ll be on the Island of Misfit Toys. Cheers!